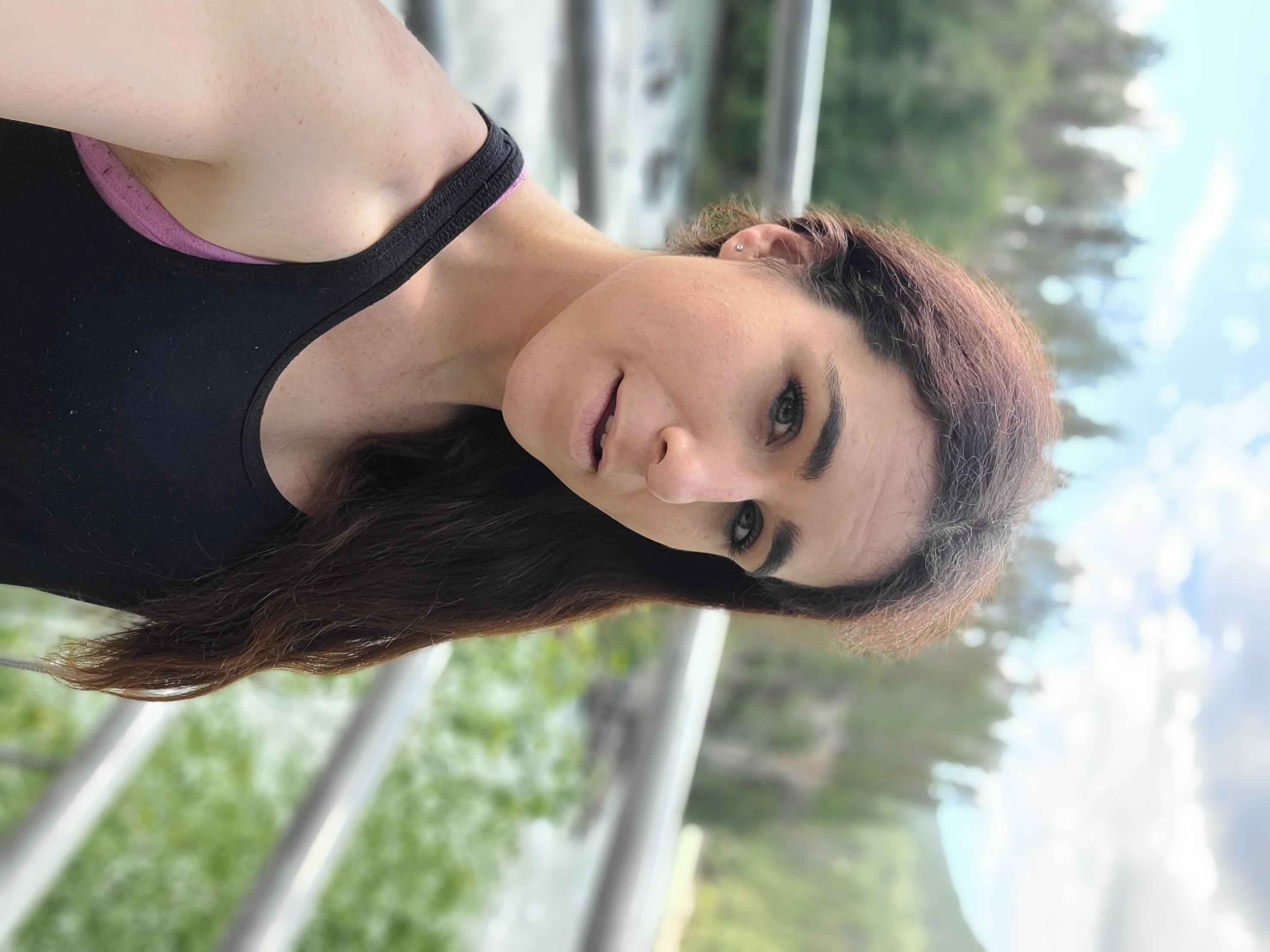 It all started in a suburb south shore of Montreal (Yes, Montreal is an island) called Greenfield Park. I had a pretty normal childhood for the 21st century. My parents are divorced, and I lived with my dad, a machinist, for a few years, and then I went to live with my mom, a secretary. Later we moved to Montreal.

I was never interested in trucking until I was 10 or 11 years old. My mom's partner was a truck driver, and on my days off from school, I would ride with him. In the winter, he worked for a snow removal company, and on the weekends and snow days, he would take me with him. I remember how cool it was driving beside that giant snowblower while it loaded us. It would only take a couple of minutes to fill our truck, and then we would go to the snow dump. The dump itself was huuuuuge. We would make numerous trips back and forth in a day. It was such a cool thing to see as a kid.

We would deliver produce to different grocery stores in the spring and summer months. We delivered to several stores every day, and I really enjoyed being on the road. I felt like a giant. I liked the feeling it gave me being in a big truck alongside the little cars. He told me stories about being on the road and going to places like California and Florida and bringing back oranges or bananas. I hoped that one day I could do the same.

Then life happened, and it was a struggle for me as I felt lost and confused. High school was hard for me, and on the day of my 16th birthday, I quit school and went to work at a grocery store. That lasted for a while, but eventually, I decided to go back to school to get my diploma.

When I was 17, my friend and I hitchhiked from Montreal to Oliver, BC, which was about a 5000km adventure. We had heard about picking fruit in the Okanagan Valley, and that was exactly what I needed at the time - to just getaway. When we arrived in the valley, we found thousands of more Quebecers picking fruit. It was like a mini Quebec…lol! I stayed for a few years doing everything from picking fruit and farm work to driving a tractor and pruning trees.

From there, I went travelling. My sister and I travelled to France with my mother when we were younger, and I loved meeting people and seeing new places. After that, I went to Australia twice and stayed there for six months. While there, I went to New Zealand and then on to a two-month backpack adventure in Thailand and Laos. When I got back from travelling, I wanted a bit more to my life and decided I needed to change my career!

I was interested in making money, but I hated school. Then trucking came to mind, and there it was. So during the summer that I turned 25, I started trucking school. It was at the school that I met my awesome friend Krista. It was great to have another female doing the course with me as there were 12 people in the class, and we were the only women.

I got my license after my 5th week of school, and by my 7th week, the school had found me a job. The job was hauling lumber from the interior to the Port of Vancouver and bringing back steel. My first truck ever assigned to me was an old Freightliner, and on my very first day, I learned about pee jugs! The truck they gave me was so filthy I almost threw up! I used about 50 Lysol wipes before even moving it! There was mouldy food in the fridge, the truck reeked like an ashtray, and to top it off, I found some pee bottles in the cab! Sadly, in this industry, you sometimes are assigned a tractor that hasn't been cleaned. And some of the people are just pigs.
I hated the job, so I quit after my first week. Tarping isn't for everyone, and if you're small and you're doing it by yourself, it can be pretty scary. Also, tarps are heavy and dirty, and if the wind picks them up, they are like a parachute. So I decided it wasn't for me. At least the next driver had a clean truck waiting.

My second job was doing LTL in Kelowna. That was good for practicing my backup skills as I would do between 10 and 20 pick-ups or deliveries a day.

Then my friend Krista told me that if I went to Fort St. John, I could make big bucks in the oil patch. So I loaded my car and went up north, only to face the same issues with every company I approached. No one wanted to give me a seat because I was too green and had no experience with mountain and bush roads, and (they said) any GOOD company will never hire and send an inexperienced driver into the bush by themselves.

So I headed back south, ending up in Moose Jaw, Saskatchewan working for an owner operator hauling grain. I never saw a paycheck from that guy for over a month, so I left! Still, to this day, I haven't seen any money. It was a hard lesson to learn.
After a month and being broke, I had nowhere to go, so I called my sister in Quebec and went to her place. I found a job the next day doing long haul! I was driving one of those condo trucks with a bunk bed, microwave, fridge and TV! Over the next nine months, I hauled freight across 45 of the lower 48 states. At first, I loved everything about it. But then I realized that in 9 months, I had about five nights outside the truck, and it slowly started to become a jail. Doing resets in a truck stop and living from parking lot to parking lot got depressing for me. Long haul isn't for everyone, and I realized it wasn't for me. It's a very lonely job. I originally wanted to see the country, but you are very limited to where you can go, and once you've been going down the same interstate a few times, you've seen it all. I guess I was a little nieve but one thing I did learn about while on the road was “lot lizzards.” One night I was in my bunk when I heard a knock on my door. I crawled out of the bunk and opened the window to find a girl there. She looked startled. She obviously did not expect a girl to be driving the truck and it produced a bit of an awkward moment before she mumbled something and walked away.

Not everything that about being on the road was funny. One day, I got stopped at the border and told they suspected me of bringing drugs across. They brought the dogs out, and apparently, they said the dogs could smell narcotics. They went through ALL of my belongings, dumping everything on the floor, having no respect for me whatsoever. I was interrogated for 7 hours and then strip-searched, and that was the end of long hauling for me. They even had the audacity to x-ray my two kitties suspecting I concealed drugs in them.

It was about that time that my friend Krista, who by then had moved to the oil patch, called and said she'd found me a job. So I called her boss, and he said I could have the job and a place to live if I got up there asap! So once again, I packed up my car in Quebec, and three days later, I pulled back into Fort St. John. I started this amazing job hauling potable water to rigs and camps across Northern British Columbia. I drove this body job to some of the most remote locations. Sometimes 100km one way on bush roads.

It took lots of courage and tears, but I pushed thru the anxiety of being all chained up even with steer chains and still going sideways down the road. It was such a fantastic life experience, with the bonus being all scenery you get to see when you're in the bush!

I was driving what I call a real truck for the first time. No plastic parts, hood mirrors, or automatic transmission. It was a Kenworth tri-drive T800 07 pre-emissions, and it had a C15 in it, and God, it was loooud and meeeean!!! I even had a cow bumper!! I fell in love with that truck! Working in the oilfield and seeing all those heavy-duty trucks and rig moves was amazing. It's a part of the industry that few people get to see. My dream truck now is a Kenworth C500 with the butterfly hood!!

I was in the patch for three years and worked anywhere between 300 to 450 hours a month! It was pretty exhausting, and after three years, I just burnt out. I needed some stability in my life and needed my weekends back.

I had started my Instagram page ("@awesumkaylee"), and over the internet, I got in touch with Chester De Raspe - Mr. Nacho himself. I eventually left Fort St. John and moved to Prince George, where I met with Nacho to see what logging was all about! I loved it! I love everything about logging except a couple of things. Chains in the mud and looong hours that are not accounted for. I was very fortunate to have Nacho train me. I rode along with him for two weeks, and then he rode with me for another two weeks. Nacho is a great trainer, and I learned so much about hauling logs in such a small amount of time. I have lots of respect for the bush, those big trucks, and, of course, Nacho.

I eventually got a seat, but sadly I couldn't handle it. Realistically I was still burnt out from the patch and 14 hours a day was just too much for me. So I eventually quit and went hauling wood Fibre, which I also hated. The company I was working for is quite big. And I concluded that I didn't want to work for a union job with over 100 drivers. If you know, you know.

Then I saw an ad from Malla trucking for reload work and only one tripper! It was too good to be true. It is the dream job for me. I get to drive a logging truck, and it's a short 9-hour day with highway work. I love driving a logging truck and the cool factor it gives me. It's rewarding doing a job that you're proud of. I love the smell of wood, the machinery in the logging industry, and seeing all the cool logging trucks.
Over the years, I realized that as much as I love trucking. Only about 5 to 10% of the whole industry interests me. As a single mom, I have many obligations. I have to be home every night. I can't be away for extended periods. Twelve hours is the very max I'm willing to go out. I also only want to be trucking if I'm paid an hourly wage—no pay by the mile, by the trip, by a percentage or piece work.

I need a manual truck, not an automatic and no hood mirrors. Preferably a Kenworth. One of my dreams is to drive a road train in Australia.

Some say I'm picky and demanding. I say I know what I want to be happy, and being happy at work is everything to me.

Rig of the month