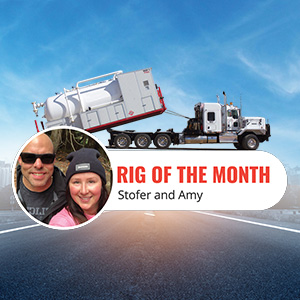 This month the rig of the month is a big truck that is built to overachieve, Unit 402, a big C500 that can bed some fantastic sized loads. It’s owned by Fox Transport, and the truck was designed by one of the company’s owners, Stofer James. While we normally showcase the driver/owner more than the truck, Stofer wants to make sure the truck gets its fair share of the limelight, so we’ll let him and the big K-dub split their space in the article.

The story starts back in an unlikely place for oil exploration, Armstrong, BC. That is where Stofer James was born and raised. His parents obviously weren’t Oilfield people, his dad was an RCMP officer turned farmer and his mom, an entrepreneur with a couple of small businesses. Stofer was going to follow in his dad’s footsteps too and not as a farmer. He went through most of the preliminary steps to become an RCMP officer, aced the testing and was in good physical shape. Unfortunately for Stofer, at the time in the ‘90s, the way the selection process was structured, it was going to be a long shot for him to be accepted. He was told it could take years, which, like most kids fresh out of high school, seems like an eternity. Time for a new plan…

It was in Armstrong that Stofer got his start trucking. Why did he choose trucking? “I like big toys and bush roads! So trucking’s perfect!” He went to work for Hornby Equipment, hauling and delivering agricultural equipment throughout the Okanagan valley. It was a great place for a young driver to learn because of the variety of equipment coming and going. He got to learn how to tie stuff down and haul oversize gear too.

Stofer was still pretty new to trucking when he first got the bug to go out on his own. In 1997 he bought a cat powered C500 log truck and began hauling logs locally. Things were slow starting out, so he picked up a highway run that had him running wood up over the Coquihalla down to the coast. Now when you meet Stof, you learn pretty quick that he’s a hustler, (and I don’t mean watch your wallet) he’s always working and looking for the next job or a way to do this one more efficiently. So it was no surprise to me when he said he found a backhaul pretty quick that pretty well doubled the money! They were long days, but he enjoyed the work

In 1999 loads of logs were slowing up, so Stofer sold his truck to a buddy and moved to Alberta to find more opportunities and better money. He found that opportunity at Cobra. They started him in a winch tractor with a tri-highboy, and he learned to haul pipe and move rigs. It was a bit of a learning curve, and like most of us, he had a few interesting moments of… learning!

“I was headed north off the Alaska Highway with a load of tubing for a rig. About halfway into the site, I came to a big hill. It was snowin’ like crazy, so I chained up, and then pin ‘er up the hill. I got about halfway when she kicked (spun the drive tires), and it hopped a few times, so I backed out of it a little, until she grabbed again, and I kept climbing. A few seconds later, I took a look back to see the center of my tubing load shifting and sliding down the hill! I ended up having to hand bomb 36 joints of tubing back onto the trailer, there’s a lesson in cargo securement!”

Stofer was at Cobra, working his way up when they were bought by Transco. We were trying to figure out the exact date that happened but it will take a forensic accountant or someone who was there because it pre-dates the advent of the web.


That’s probably one of the reasons we couldn’t figure out what his job was in 2006 when Transco was bought out by Flint. He may have been a wheeler hand or running the big bed as he worked in almost every area of rig moving in the time he was there. Learning the ins and outs of Oilfield hauling on the ground helped him move into dispatch. His title when he parted ways with Flint was Dispatch Manager. All the skills he picked up while at Cobra/Transco/Flint and maybe a bit of his mom’s entrepreneurial spirit gave him the perfect preparation for his next chapter.

In 2013 Stofer James and friend Chris Cassain started Fox Oilfield. Its only 7 years back, but it wasn’t exactly the heyday of the oil patch when the two got started. Buying three older winch tractors and a bed truck, they began making a name for themselves early on as a company you can count on to get things done. Stofer dispatched and drove while Chris handled the office and management aspects. It’s a partnership that still works well today. “We play to our strengths and respect each other’s decisions. It’s what helps us grow and stay strong.” Chris had said that to me once when I was asking him. Honestly, having worked with the boys at Fox, I can say it does work well.

Since I am near halfway through this article, it might be time to introduce Unit 402? It actually fits the timeline pretty well too because with times changing and belts tightening, Stofer was looking to something to give Fox a competitive edge. If you’ve spent any time in the patch, you’ll know what a Texas Bed or T-bed is but for those of you who haven’t let me explain. The T-bed is part winch tractor and part bed truck. A traditional bed truck used for rig moving and in the Oilfield will have a full-width flat deck that ends just behind the rearmost wheels. It will have one or two winches mounted at the front of the deck and a full-width roller on the back.

A winch tractor will have obviously a winch mounted behind the cab, and generally, a small frame width roll mounted lower and behind the rear wheels. This is the Reader’s Digest version of the differences in oilfield trucks, so if you want to discuss it in-depth, I’d be glad to just not here. If you have more questions at the end, feel free to contact me for more info!

So a bed truck is designed to be able to move and spot loads on a location by winching them onto the tail roll. A winch tractor is lighter and is used in conjunction with a trailer to move these loads down the highway, where legal weights and measures are concerns. Now, most bed trucks can pull a trailer, but given their already heavy weight with the deck and big winches, they can’t haul much payload. A winch tractor can haul the payload and can load and unload over the tail roll of its trailer, but it doesn’t offer the maneuverability of a bed truck on site (you also can’t stand up tanks and bins without a bed truck, but we can cover that another time). This is where the T-bed comes in. The Texas bed is a winch tractor for the most part, but we add a few bed truck pieces, a pop-up tail roll, one to three pop up or fold up bunks to take the place of the bed and a bit more wheelbase. When you do this, you create a truck that does double duty.