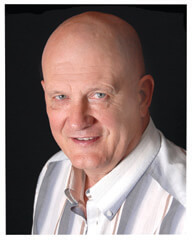 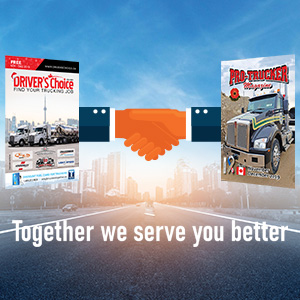 Welcome to 2020 and Pro-Trucker Driver’s Choice Magazine. Pro-Trucker has been publishing for 21 years, and Driver’s Choice has been publishing for 14 years. We have now merged to form this unique and much-improved trucking magazine. Our 35 years of combined publishing experience has taught us that the perfect trucking magazine should give you what we both have individually given you in the past. You will still be able to read articles from your favourite writers and have a platform to express your personal concerns, but now, compliments of Driver’s Choice, you will have more current job opportunities, and parts and services advertisements, of any trucking magazine in Canada – all in one magazine and right at your fingertips. Another significant change is that Driver’s Choice already distributes in Ontario, so Pro-Trucker’s readers from Ontario will now be able to pick up Pro-Trucker Driver’s Choice at their local truck stop. I, as the editor, still intend to bore you with my sometimes overly opinionated and not necessarily right, point of view of the trucking world. Hopefully, as in the past, this will encourage conversation and, through letters, continue to give you a platform to share your views. Pro-Trucker’s talented, occasionally humorous, and sometimes a little strange, writers will also continue to share their stories about life on the road.

Pro-Trucker Driver’s Choice will continue to hold the government’s feet to the fire to
make your workplace safer by putting in place MELT programs that actually do what they
were initially intended to do. Not just knee jerk reactions that leave out very fundamental
things like training for specialty loads and the many different truck-trailer combinations.
Not to mention essential things like chaining up. This brings up mountain driver training.
Today, in the eyes of the government, a driver who has never seen the mountains is fully
qualified to maneuver over them in the dead of winter, pulling any and all loads. Apparently,
our politicians have never tuned in to Highway Thru Hell or Heavy Rescue:401. (Did I
mention my sarcasm will still be alive and well?)

It is good to see people getting on board and questioning why ICBC and the BC government, two years after the Humboldt tragedy, have yet to do anything towards implementing a MELT other than to paying it political lip service This is not just a BC problem; this is a national problem because drivers from across Canada are still forced to share the road with new drivers from BC who have not gone through a MELT program. BC has the most dangerous mountain roads in the country with steep grades and unpredictable weather changes, yet provincial politicians have sat back and watched as first Ontario, then the prairie provinces have all implemented a MELT program.

The political doublespeak that BC politicians and ICBC use are just to appease the
voters so that the politicians do not have to commit to a timeline. Statements like, “We
are closely watching other provinces’ programs” or “Applicants for a Class 1 commercial
driver’s licence in B.C. are required to undergo robust testing…” Those statements can be
described as stalling for time at best but could just as easily be seen as pure negligence by
our politicians whose duty it is to protect you and the general public. I stand by the editorial
that I wrote just after the Humboldt tragedy. Every politician in Canada owns part of that
and any other accident involving a new truck driver.

If, as stated, safety was the primary concern of our politicians, they would be working
on a national Class 1 apprenticeship program with graduated licensing that would culminate
with a Red Seal Certification.