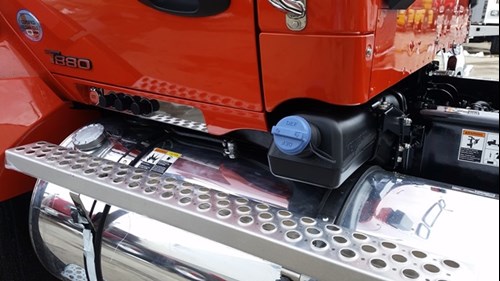 I  unloaded a load of machinery in Edmonton and phoned home to see If Dad had found me a load home, and he told me about this great “light” load up in Cold Lake at the airbase that was going back to Trenton. It seems they had a bunch of drop tanks off RCAF Mosquitos that were being shipped back to Trenton to be sold off. Well, that was not very far away, and being a Government load, it paid well and was under no rush. Off to Cold Lake I went and the next day showed up at the gate late in the day. I was told that it was too late to load so I got to spend a night at the transient barracks and grabbed a couple of meals at the Officers Mess.

After a great breakfast the next morning, I was off to the loading area, and let me tell you there was a pile of these tanks sitting there of all different sizes. Since they were all packed on cradles, we put three across the front of the trailer then packed two on the next tier and a single on top. The airmen there banded them up well, and I threw a couple of cables over and tightened them down. There was another row the same as the first, and then there were some bigger ones. The larger ones were not exactly the same. They were grey while the rest had been painted camo. I was told that they were just from a different Squadron and not to worry. We placed the larger ones two across with one on top and again banded them down. We then finished off the load with more small tanks, signed the bills, and away I went.

I knew it was going to happen, and sure enough, the first open scale I hit (Lloydminister), I got the red light, and they wanted to know what in the heck I was hauling. I told them they were guided missiles and then laughed and handed them my papers, and I was soon back on the road. After that every open scale just had to pull me in. I was thinking that maybe I should have tarped the load, but everything was fine, and I finally made it home. I stopped at the house for a couple of days and then headed down to Trenton to unload.

I pulled into RCAF Trenton, handed in my papers at the gate and was directed to a hanger where I would be unloaded. I pulled in and parked where directed and proceeded to remove all my cables and get everything ready for the crew to unload. The crew was led by an older Flight Sargent, and when he saw my load, he just about dropped his drawers. He asked me how much the large tanks weighed and when I told him I didn’t know, but they were heavy, he called security and fire and bomb disposal. It seems that what I had been told were fuel tanks were actually 1000lb Napalm bombs without detonators or tail fins. Well, it took two days to unload what we had loaded in twenty minutes, and I was a guest of the Government in their Crowbar Hotel until the mix up was straightened out. I believe it was fortunate that I was ex-RCAF because if I had not served, I do believe I may have been handled a little rougher.

It scares me to think what might have happened if I had an accident with 3000lbs of Napalm behind me, but I guess all’s well that ends well. Apparently, the shipper up in Cold Lake got to take the blame for not checking part numbers, and I went back out on the highway no worse for wear.