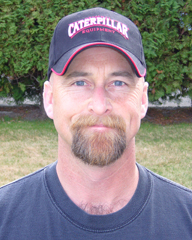 Posted By Scott Casey : Scott has written “Ghostkeepers” a book about his years as a gun toting truck driver while serving as a Canadian Peacekeeper in the former Yugoslavia. On 2020-01-31 10:07:57

Johnny's right hand deftly moved the gearshift from the "big hole" and downshifted through all the gears smoothly till he was slowly rolling through the parking lot of one of the most popular truckers cafes in the Crow’s Nest Pass.
He drew a line in his logbook, got his coffee cup and wallet, and then waited an extra minute to let his Kenworth cool down. A smile emerged upon his face as he noted the turbo had cooled down and cycled the ignition key to the off position.
The summer heat hit him square in the face the instant he opened the truck door. Walking across the parking lot, he was already thinking of the "Wednesday special," of roast beef, mashed potatoes, gravy and Yorkshire pudding. His favourite meal. Even with the anticipation of such a splendid feast, he turned slightly on his heels and glanced back at his A Model. He sure loved his truck and its shine.
Johnny had been in the trucking industry for 18 years, and today, he was celebrating his one-millionth mile. A significant milestone for professional drivers.
Phyllis, the waitress, turned the moment she heard the familiar jingle of the bell as the main door to the cafe opened. She placed the lightly bleach soaked cleaning cloth in the sink, rinsed her hands off, and welcomed the trucker by name.
"Johnny, come on in darlin, coffee to start?"
To which he nodded with a big smile, "Yes ma'am."
Sitting in his usual spot, he glanced around at his surroundings and felt the air conditioning soak the heat from his body.
Johnny had seen his fair share of greasy spoons and dives in his 18 years on the road. He always marvelled at how clean his favourite cafe was.
"Phyllis, I gotta hand it to you, this place is cleaner than my truck. And I don't have near the square footage to maintain," he said, genuinely.
"It's a lot of work, but I've never had one person leave here end up in the hospital," she replied proudly.
Johnny continuing his compliment, said, "Well, the reputation that you've created by running such a great cafe has spread from Vancouver to well past Speedy Creek and from here all the way to Willy’s Puddle, for sure, maybe further."
Phyllis waved her hands at him in mock embarrassment. Down deep she was pleased that her hard work was noticed far and wide.
The conversation made Johnny think about how he maintained and drove his truck. With the utmost care and attention to professionalism. Much the same as Phyllis ran her cafe business. She proudly displayed her inspection reports right next to the cash register.
He knew restaurants had regular inspections by the health board. There were thousands of restaurants in each province, all governed by provincial health ministries. He thought that there may even be federal health inspectors who conducted random inspections. So why is it restaurants fail health inspections regularly? There are chef schools across the country and Food Safe courses for all restaurant employees. Yet, across Canada, restaurants get busted for failing to meet the standards laid out.
Enjoying his tender roast beef dinner, he couldn't fathom that issue here. But, what are the common denominators for other restaurant businesses?
Were they, lack of enforcement? Schools being run by deceptive owners? Loose deals between inspectors and restaurant owners? Could it involve temporary foreign workers? Maybe even immigration scams that bring individuals in that circumvent the entire system.
These questions, as he mulled them over while eating, carried a very familiar ring to them.
The trucking industry was very similar in how it lacked enforcement and schools, which circumvented the process. And although there were inspections conducted regularly, the spoilers seemed to run their fleets like a 53ft reefer of swinging meat that had no refrigeration in August.
Would the New Year bring a complete change to the industry? The upcoming imposed National Driver Training Standard was set to begin.
Johnny sat back in his chair and smiled. He had just cleared one million safe miles and eaten the best meal in days, in the cleanest joint on the road.
Maybe it was time to hang up the steering wheel and let the powers that be figure out the answers. One thing is for sure, he thought out loud, "It'll be interesting to see what the feds have cooked up for the industry because there will be no better clarity than the hindsight of 2020.